This is the rolling coronavirus story for Wednesday 9 December 2020

The cases are concentrated in thirteen localities, with 25 cases in the capital. There are 109 cured

Almería continues to experience its particular 'de-escalation' in the coronavirus crisis with figures that, although those of this Tuesday worsen, when the best day since September with only 34 positives, are once again below the hundred daily positives.

According to the latest update from the Andalusian Institute of Statistics and Cartography, this Wednesday, December 9, the first day after the bridge, 63 new cases detected through PDIA (Active Infection Diagnostic Tests) have left in Almería, which includes all cases of Covid-19 with active infection, confirmed by PCR technique or latest generation rapid antigenic tests, following the new surveillance strategy of the Ministry of Health).

Thus, there are already 19,307 total confirmed coronavirus cases in the province of Almería since the outbreak of the pandemic.

This figure makes Almería, together with Jaén, also with 63 positives, in the Andalusian province with the most confirmed cases in the last 24 hours, although the figures are also low in the rest: 54 in Cádiz, 54 in Córdoba, 32 in Granada, 22 in Huelva, 32 in Malaga and 46 in Seville.

The day adds, yes, a new fatality: a neighbor of Vélez Rubio from the age group of 95 to 99 years. A death that brings to 233 those caused by the virus.

Regarding those recovered over the last 24 hours, today there are 109 people who have overcome the disease, so the total figure stands at 13,731 cured.

In this way, right now there are 5,343 cases of active coronavirus in the Almeria geography: a total of 19,307 people have contracted the virus while 13,731 have already overcome it and 233 people have lost their lives since the beginning of the pandemic.

Regarding the incidence of the virus in the different localities, the 63 infections have been reported in 13 localities of the province, with special prominence in Almería capital, where there have been 25 cases, 40% of the total. In this health district there have also been new infections in Carboneras (2), Alhama de Almería (1), Pechina (1) and Viator (1).

And the Levante-Alto Almanzora health district has seen the addition of 14 more cases in the last 24 hours: 6 in Turre, 5 in Cuevas del Almanzora, 2 in Huércal-Overa and 1 in Mojácar.

Also, the day has left 1 case in Almeria municipalities "unspecified" (there is no further information either because the patients are not registered in Almería, because they lack Spanish documentation or due to another type of error in data collection).

Regarding the state of the hospitals in the province, according to the Junta de Andalucía two more people have been admitted because of the coronavirus, although none in Intensive Care.

At the moment, Almería has 115 hospitalizations, of which 37 in the ICU.

According to the Ministry of Health and Families, 1,534 patients confirmed with Covid-19 remain admitted to Andalusian hospitals, of which 337 are in the ICU.

Cumulative stats based on data from Almería 360 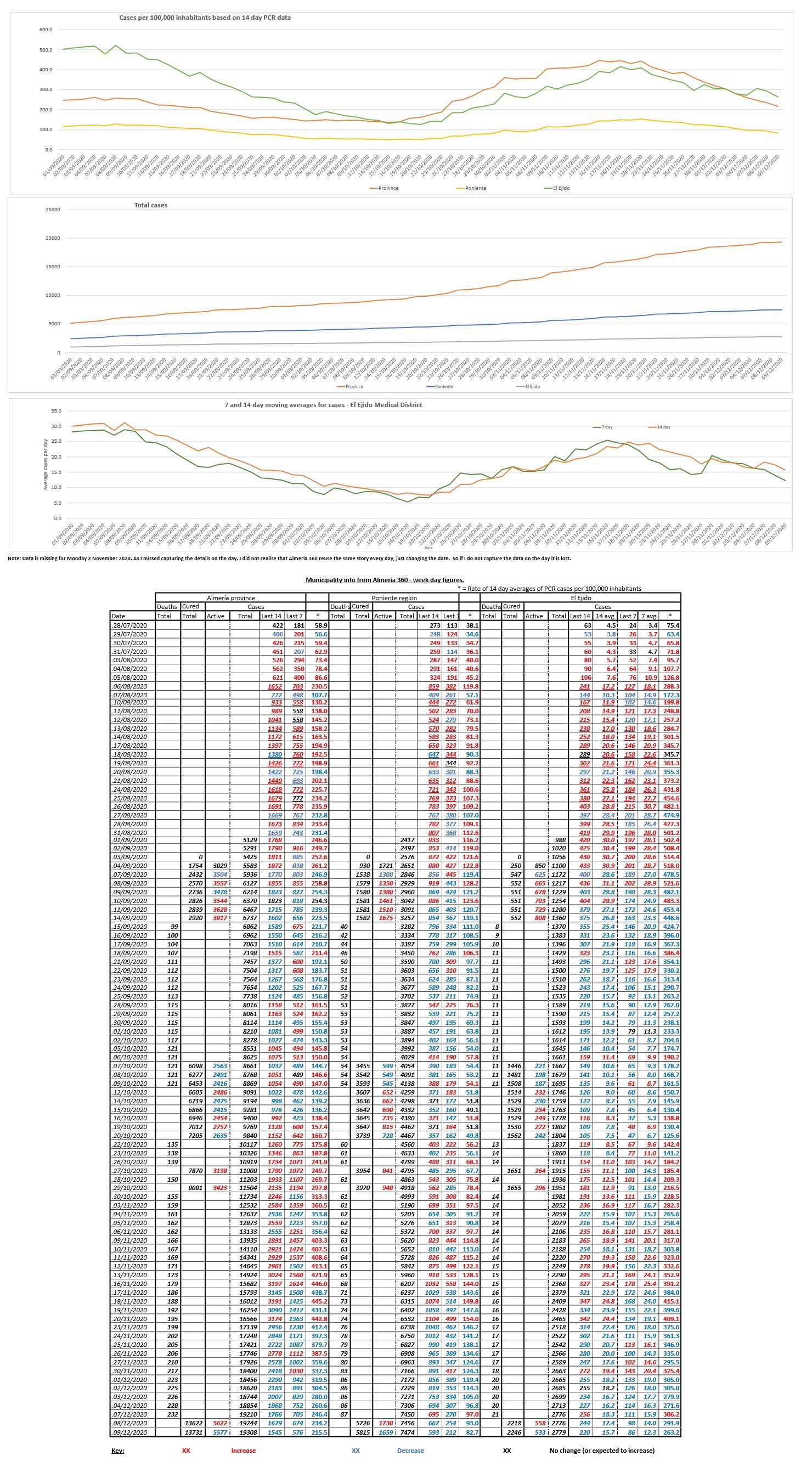